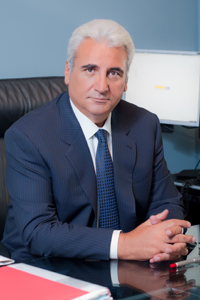 Dimitri Stavropoulos is senior counsel and the firm’s chairman and managing partner. He was born in Montreal, Quebec, Canada on December 31st, 1955. He received his primary and secondary education in the multi-cultural environment of Quebec and at age 15 he was honored with early admittance to study Economics at Loyola in Montreal.

Thereafter, he was accepted to attend the prestigious Athens University of Law in Athens Greece, from which he received an LLM Degree 5 years later.

As a young lawyer, Dimitri acquired valuable experience working in law firms in Canada and in Europe. His tenure in these jurisdictions opened the way to choice positions in a number of the most prestigious law firms in Athens that exposed him to matters of profound legal import and substance and provided him with the opportunity to work with some of the best legal minds and proficient legal teams. His career since his admission to the Athens Bar Association in 1980 has been a constant accumulation and growth of experience. From his position in the firm Stavropoulos L.C. which he first launched in 1987 as a personal legal services entity and is now a registered corporate entity operating under the authority of the Athens Bas Association, he has represented clients both in the private and the public and government sector, in retail, manufacturing,
real estate, healthcare, mergers and acquisitions, with a particular experience and an innate gift in the field of business accompaniment. He has drafted and negotiated contracts and agreements both domestic and international. He has litigated hundreds of commercial and civil cases many of which made the headlines of the day. His firm covers all of his areas of expertise, including:

Dimitri has also regularly attended and has appeared as speaker in Seminars, nationally and internationally (In Australia, U.S. and Canada) on television and radio to discuss and provide opinion on issues of Greek Law. He is a member of a number of legal Associations (l.a.w – Lawyers Associated Worldwide and The Hellenic American Lawyers Association of Chicago) and is a member of AHEPA and The Hellenic Canadian Chamber of Commerce. He has also written various published articles some of which include:

His recent legal work includes, drafting and preparing two concurrently executed co-venture agreements involving The People’s Republic of China in the areas of cruise liners and commercial fishing. He currently heads the legal department of a Greek Commercial Airline Company.

Dimitri has also served in international trials as an expert witness in Greek Civil and Commercial Law in various jurisdictions of Courts in North America.

From his many years of devoted legal practice, Dimitri Stavropoulos has created a vast network of domestic and international partners & associates and professional affiliations, consequently achieving intrinsic collaborations in all aspects of the Law to better serve and protect his clients and their interests both nationally and internationally.